In the past year, the California’s Surgeon General, Dr. Nadine Burke Harris, announced that the state was adding “access to nature” to its list of seven Stress Busters as published in the Roadmap for Resilience which highlights how Adverse Childhood Experiences (ACEs) and toxic stress impact long term community health.

At Wilderness Youth Project, we have always known that there was evidence (and our first-hand experiences with local kids) that showed that time in nature with caring mentors makes kids happier, healthier, and smarter but we are thrilled that the state is at last officially recognizing the power of nature to protect kids and buffer toxic stress.

What are Adverse Childhood Experiences?

Adverse childhood experiences, or ACEs, are potentially traumatic events that occur in childhood (0-17 years). The three categories include:

According to the CDC's ACE Fast Facts:

ACEs are costly. The economic and social costs to families, communities, and society totals hundreds of billions of dollars each year.

As reported in the Roadmap, individuals with four or more ACEs are:

ACEs and toxic stress represent a public health crisis in our local neighborhoods and beyond. The good news is that ACEs do not cement the future! 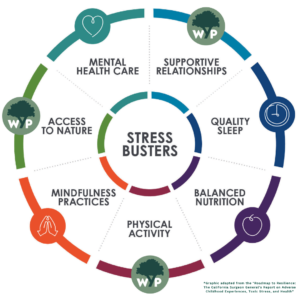 There's evidence that proves that kids who are facing challenges and toxic stress from Adverse Childhood Experiences will do better if they have at least one of these seven resources in their lives:

These resources and interventions can mitigate the impact of toxic stress response.

Wilderness Youth Project is proud to be actively working toward three of the seven stress busters – access to nature, physical activity and building supportive relationships.

We are continuing to learn how to buffer these adverse experiences at a young age and stop the progression of lifelong illness. You will continue to see lessons from the research being applied not only at Wilderness Youth Project but also within policy and practice in our clinics and hospitals, schools, workplaces, childcare centers, courtrooms, and elsewhere throughout our communities.

You can learn more…