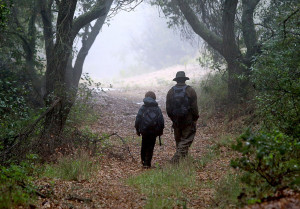 “What’s becoming of our children?” people are asking each other. When I was 10, I donned the massive headphones of the 1970s and listened to Simon and Garfunkel sing about a boy sitting on a ledge. I assumed the eerie refrain, which reeled itself deep into some secret passage of my brain, was the voice in that boy’s head, “Oh, my grace, I got no hiding place.”

I recently read that “earworms” (my current favorite neologism, meaning something like “bits and pieces of songs that get stuck on repeat in our heads”) can be treated by the same medications that are used for obsessive-compulsive disorder, or anxiety. Woah! Meds for a song stuck in my head? Boys on ledges are given a swift prescription, and people are still wondering what’s becoming of our children. I have a theory: we are running a grand science experiment on them.

For generations of human beings born on planet Earth, our young were raised in the habitat for which they had adapted. The scientific name for this habitat was “Nature.”
Then, one day in 1976, a researcher at the University of Michigan posed a compelling question: “What if we took human young out of their natural habitat and raised them inside buildings or cars for 90 percent of their lives? What if we placed them in front of screens or monitors for 20 to 30 hours per week?”

Results are coming in from this study; the medical establishment changed the name “adult onset diabetes” to Type 2 Diabetes, recognizing the increasing number of juveniles affected by this disease. Doctors are seeing big increases in prescriptions for high cholesterol, asthma, attention deficit, and hyperactivity. Prescriptions for stimulant medication to treat Attention Deficit Hyperactivity Disorder (ADHD) have increased 500 percent since 1991, according to the Drug Enforcement Administration.

Okay, I made up the part about the 1976 experiment. But the results are real, so how did that happen? A whole bunch of things changed in our culture. We became a child-centered, workaholic nation. We became obsessed with earning and cleanliness. Suddenly, strangers and forests, those former repositories of possible pleasure, were scary. TV and computers became ubiquitous, and kids moved indoors.

In 1995, Rachel Kaplan, who actually was a researcher at the University of Michigan, presented her scientific findings, concluding that: “The experience of nature, whether passively observed or actively participated in, is an important component of psychological well-being.” Radical stuff, this.

I’m not always popular for bringing up this topic. Friends tell me, “There’s no going back, progress is good, go with the flow.” Believe it or not, I’m no Luddite. I get immense pleasure from downloading new apps for my iPhone, and I have spent half of my working life geeking out in the software industry.

But, I spent my childhood outside. Right up until the fog of teenager-hood took over my brain and I immersed myself in 1980s mall culture, you would have found me in the creek or up my favorite tree. The world has changed, certainly, but today’s kids need their natural habitat as much as we did. Maybe more.