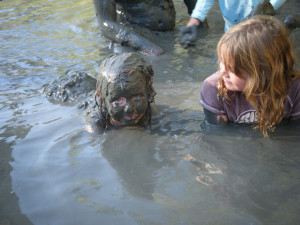 My favorite Ruebush quotation so far is: “Dirt is good. If your children aren’t coming in dirty every day, they’re not doing their job.” Her point is that all this rot about antibacterial soaps and compulsive cleanliness is actually having the opposite of the desired effect: instead of healthy kids, we’re raising kids prone to allergies, asthma, and auto-immune disease.

Ruebush’s basic hypothesis is that if children aren’t exposed to dirt, bugs, and bacteria early in life, their bodies never learn to tell real threats from the random array of mostly harmless stuff that invariably finds its way into kids’ mouths, ears, noses, and lungs.

We’ve all been around a 12-month-old in the throes of oral fixation, doggedly determined to perform the taste test on everything within reach. Car keys seem to be a favorite. At that age, my daughter had a particularly endearing habit of latching her strong little mouth onto the nearest beer bottle, especially if I had company.

The taste test often turns into the parental Marx-brothers routine in which adults desperately try to distract the baby with an unappetizing array of sterilized plastic teething toys, to no avail.

So why all the fuss?

The information age offers a freight-load of frightening information to parents, unveiling the rich array of pathogens, bacteria, allergens, and other icky things that are everywhere. We’re surrounded! Ruebush offers some relief: We can let our kids eat dirt and still be good parents.

Ruebush isn’t alone in her return to common sense. Everywhere I turn, new studies are popping up to demonstrate the smorgasbord of benefits kids get when they spend time in nature. Land and People says: “Research has shown that free play in nature increases children’s cognitive flexibility, emotional capacity, critical thinking, problem-solving, creativity, use of imagination, self-esteem, and self-discipline. It makes them smarter, more cooperative, happier, and healthier.”

I’ve seen it myself.

Have you ever picked a kid up after school and tried to extract something, anything, about what happened that day? The memory of the entire six-and-a-half-hour school day is suddenly erased from the child’s brain, and replaced with a selection from the short list of kid-acceptable answers, beginning with “nothing” and ending with “I dunno.”

On the flip side, a while back I picked up four kids at Tucker’s Grove after an afternoon of rainy, muddy adventures with WYP. My car’s upholstery may not have fared well, but it’s washable, and worth it for the giddy sounds of four kids simultaneously broadcasting four different stories of the afternoon. I have no idea what they did, as I couldn’t actually discern words from the overall din, but I know that they were truly alive, happy : and dirty.

Why Dirt is Good by Mary Ruebush

1 thought on “Let Them Eat Dirt”