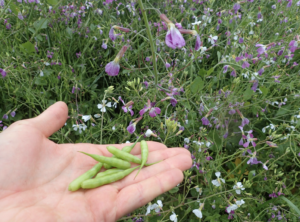 The wild bounty of spring is here! Some of the fastest growing spring flowers are already going to seed, and by no coincidence, many of these speedy seedsters are considered invasive non-natives. This group of invasives includes two species in the mustard family (Brassicaceae) commonly known as wild radish: Raphanus sativus (taller with purple and white flowers) and Raphanus raphanistrum (lower-growing with yellow flowers).

Through the naturalization process in California, these two species have hybridized so thoroughly that an indeterminate mix of characteristics from both parents exists in the CA wild population – you can find all different hues from white to purple to yellow, sometimes in the same radish patch! When invasive non-natives go to seed, it makes habitat restorationists sigh knowing it’s already too late to prevent their spread and there will be a stronger foe next year. However, in the case of the wild radish, it’s a call to arms (or harvesting shears), wild radish seed pods are delicious!

Wild radishes can be found in many roadside locations around Santa Barbara and Goleta, but the largest patches are generally in open areas in full sun. If you’re heading out to harvest, try the closest of the following locations to you: Parma Park, San Marcos Foothills Preserve, More Mesa, Lake Los Carneros, or Ellwood Mesa. Look for the purple and white (and sometimes yellowish) flowers growing chest-high in a sunny open area.

Despite being considered an invasive non-native, wild radishes are still very much alive. There’s no place for rage in harvesting, merely respect, gratitude, and positive ecological stewardship. Take only what you need, around a quarter to a third of the pods from any given plant and area. Besides, plants talk to one another: a thrashed neighbor might be making the pods you’re harvesting taste worse. The tastiest pods are usually the youngest ones, but it’s a good idea to sample from each stalk as you go so you can harvest to your taste.

Society garlic, Tulbaghia violacea, is a common horticultural plant, typically grown for its compact shape and attractive pink flowers. Look for the grass-like leaves that have a garlic odor when crushed, a great substitute for chives! 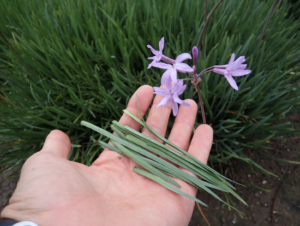 Brazilian peppertree, Schinus terebinthifolia, is the most common culinary source of pink peppercorns and can be found planted as a street tree in Santa Barbara and Goleta. Its close relative, the Peruvian peppertree, Schinus molle, is perhaps more common around town, though less utilized as a source of pink peppercorns commercially. Both are members of the family Anacardiaceae, which also contains poison oak, poison ivy, poison sumac, mangoes, and cashews. Most members of this family can elicit allergic reactions, if you have a strong sensitivity to any of the above, it would be best to avoid and use black peppercorns instead. Select dried peppercorns, or let dry for a few days after harvesting, to reduce the chance of an allergic reaction. 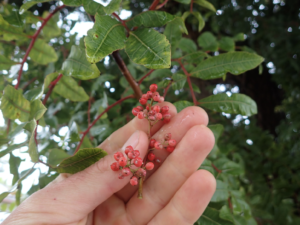 Fennel, Foeniculum vulgare, is a common non-native invasive species that can be found in many of the same sunny open areas as wild radish around Santa Barbara and Goleta. It has a vertical growth habit and at this time of the year can be found leafing out from its bulb. It has feathery green leaves and its flower stalks form umbels at the tips. Be careful and be certain when identifying – it has a very similar appearance as poison hemlock and can be mistaken for it. You can find last year’s seeds in the dried umbels, the seeds pack a lot of the sweet anise flavor that fennel is known for. 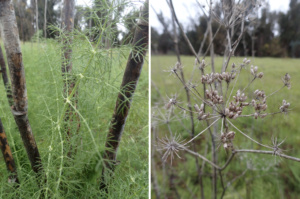 The table is set… 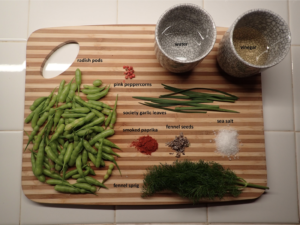 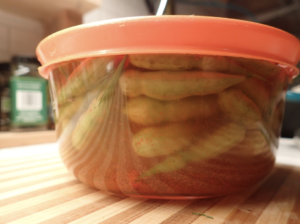 You can use any non-reactive container, as long as the radish pods are fully submerged. The wax paper prevents the vinegar from corroding the jar lid, and glass is typically the most neutral in terms of taste, but tupperware will work fine in a pinch.

This recipe is really just a baseline, flavor to your palate and try many new wild harvest combinations! It’s also pretty heavy on the fennel taste, if you are not a fan of anise flavor, don’t bother with the sprig or seeds. As long as you’re making a 50/50 water/vinegar quick pickle brine with a healthy amount of salt (and sugar) you’ll be fine.

It’s possible to add a grape leaf, an oak leaf, or another source of tannins to achieve that holy grail pickle crunch. However, it’s also possible to go overboard on the tannins and ruin your brine, so tread lightly.