Today’s families are running a great big science experiment, with our children as the guinea pigs. 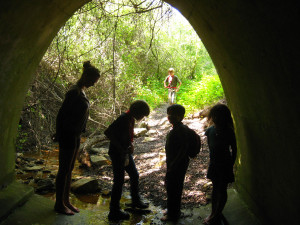 We have moved away from being a nation in love with nature to a nation in love with screens. In one generation, the percentage of people who reported that the outdoors was the most influential environment of their childhood dropped from 96 percent to 46 percent. This trend away from raising our kids in nature has real implications for their health and well-being. Obesity, Attention Deficit Disorder, and impaired social skills are just a few of the ways children are being impacted by what author Richard Louv has dubbed, “Nature deficit disorder.”

When I told my editor that I thought nature deficit disorder was an important part of the health-care debate, she said, “What the hell do children and nature have to do with health care?”

Health care (noun): the field concerned with the maintenance or restoration of the health of the body or mind.

Here are a few key facts about the health of our nation’s children:

• Childhood asthma has increased by 160 percent since 1980.
• Prescriptions for stimulant medication to treat Attention Deficit Hyperactivity Disorder (ADHD) have increased 500 percent since 1991, according to the Drug Enforcement Administration.
• The average kindergartner has watched more than 5,000 hours of TV by age five. (Note for those who need to use the television as a babysitter: That’s more than enough hours to earn a college degree.) 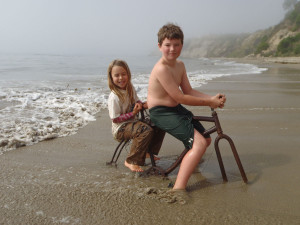 So here’s the science experiment: We’re taking our children, who basically are designed to spend a good part of their formative learning years outdoors, and confining them indoors and in cars for most of their waking hours. This transformation has happened in just two generations. The statistics we’re getting from those two generations look grim, and the truth is we don’t have any idea what the long-term implications will be.

Shouldn’t a radical change in the environment of a species be tested first? I think if we were evaluating our outdoor-to-indoor habitat change as if it were a clinical trial, we would beat a hasty retreat. But the indoor-ization of children isn’t a new drug, and it hasn’t been approved by the FDA. Its sources are much more insidious and much more difficult to combat.

We’re looking at a complex cocktail of sociological forces, ranging from increased working hours in the family to a prevalent attitude of fear. People talk about how the world is different today, and assert that we can’t let children play outside freely like we used to. But why not? Negating the prevalent belief that abduction and violent crimes against children have increased, novelist Michael Chabon put it best: “Such crimes have always occurred at about the same rate; being a child is exactly no more and no less dangerous than it ever was. What has changed is that the horror is so much better known. At times it seems as if parents are being deliberately encouraged to fear for their children’s lives, though only a cynic would suggest that there was money to be made in doing so.”

Cynic or not, it’s clear that there’s little money to be made by letting children play outdoors: Commercials can’t get to them. Out there, there’s nothing to buy. Middle-class American children today have schedules as intricate as a CEO’s. Their precisely choreographed agendas involve traveling (by car) from home to school, playdates, extracurricular classes, organized sports, child care, and “quality time” with the family. 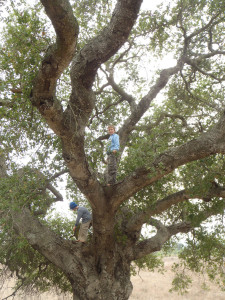 This is the new normal, and it leaves almost no time to be a kid. We’re missing the fundamental importance of our own human relationship to nature. Can you imagine reading about Tom Sawyer and Huck Finn adventuring around in the mall? Last weekend I traveled to visit the landscape of my own childhood. “The Tree” was the gathering place for my friends, and we spent countless hours there inventing stories that usually involved the magical disappearance of grownups, leaving us to survive without the benefit of homework and bedtimes. The Tree remains, but the well-worn trail of my memory is now grown over with berry vines, and the little camp is covered in a deep layer of sycamore leaves. It’s the first time I’ve felt saddened by the absence of those tell-tale carvings in trees, M.H.+ M.S., a pocketknife’s testament to teenage love. The young residents of my hometown must be too busy to discover the tree. But the human-made material world simply can’t provide the inspiration and solace that nature has offered us for all time.

If health is our priority, we need to quit using our children as guinea pigs and get them back into their natural environment. That’s how we can tend to the maintenance or restoration of the health of the body and mind.