Some kids constantly sweep the ground with their eyes; they are the ones that find all the treasures. Then there are the kids who are constantly stretching the boundaries with their eyes, “Can we go up there?” “Can we just go around the bend?” “Can we follow that trail?” I found myself with the latter group wandering one morning on the north side of the Santa Ynez River. Our plan was to check up on some stick forts we had constructed nearly 6 weeks previous. Sure enough, in the calm satisfaction that came with finding our teepee still standing, a pair of wandering eyes lifted toward the horizon, “Can we go up there?” What was to follow was emblematic of the dance between Nature Connection and Mentoring.

“There,” in this case, happens to be the type of terrain that typically bounds the Santa Ynez river valley in many locations; seriously rugged country, as close to vertical as possible while still remaining vegetated. And of course by vegetated I mean yucca with its needle-like tips; sure there is the mandatory coyote bush, chamise, and sage but really their only collective purpose is to hide the yucca and rogue stems of leafless poison oak. All of this vegetation is resting on a tenuous substrate of sunbaked sand, clay and disintegrating bedrock just waiting for something to upset the angle of repose and accelerate the soil’s inevitable march to the Pacific Ocean. Crowning our hilltop is a precarious headwall with a very appealing if not totally mystifying stand of oak whose alluring silhouette is likely to blame.

“Up there?” I say, “Sure. Looks sketchy though, can anyone think what hazards we should be aware of?”

“Poison oak.” “Rattlesnakes.” “Mountain lions!” All of this seems a little too rote for my taste, and no one mentioned falling rocks, or the feeling of being dragged along a cheese grater which I sometimes equate to bushwhacking in gnarly chaparral. So I have them visualize getting speared by a yucca leaf while a football sized rock slides over their hands. At this point some of the uncommitted have decided to stay and reinforce the teepee. But still I set off with four boys and two girls and another female staff, Sonia.

This is important because this piece is actually (in part) a case study in gender and how it plays out sometimes in a wilderness adventure setting. This came to our attention because of the very simple next set of events. Without much intention, the order in which we began to climb the mountain was: the four boys first, followed by me, the two girls, then Sonia in the rear. The boys were the first to encounter the above noted difficulties posed by the slope, and their uphill progress was accompanied by howls of pain/laughter/pain/boyhood which sounded like: “OwheyowcutitouthahahaowOWwatchitheeheelookoutowcutitout!” The question that was constantly being hurled into the air was, “Why are we doing this?” and nobody was offering an answer. Not too long into this debacle the girls decided they wanted to explore elsewhere and descended with Sonia. The boys and I continued to what we mutually agreed would be the top. I was psyched to pause and enjoy the detailed panorama of our little stretch of river,  but the boys were immediately thinking about the trials of going back down.

“It’s going to be quicker” was one boy’s honest appraisal. 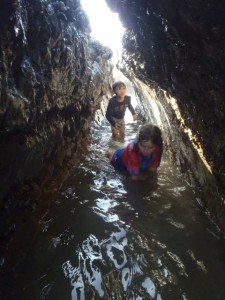 When a Wilderness Youth Project Program finishes,  the staff always has a half hour debrief. Sometimes we are planning for the following week, sometimes we’re breaking down trends or dynamics that seem to be brewing in each group, other times we’re analyzing all the influences that led to a certain event. On that particular afternoon Sonia mentioned that she wished there had been a way to encourage the girls to get to the top. My first response was, “I know what you mean, but that hike was a dumb idea.”  I meant that even though the boys got the glory, it was not an example of good judgement. At WYP we pride ourselves on BOTH the development of good judgement and pushing the edges of what we initially believe to be our boundaries. That hike had been squarely in the latter category with nothing but a polite nod to the former. Still, there it was. The boys climbed the hill the girls did something more reserved. Sonia has an 11 year old daughter, I have an 8 year old daughter. We both want daughters to climb hills. So we examined the event; discussing what could have made it go differently. One thing we noted was the initial framing of the adventure, by me, which was essentially: we can climb it but you guys are going to find out how poor of an idea it really is. Speaking generally, boys genuinely don’t care if it is a bad idea, girls seem to appreciate the merits of a good idea. If it had been more of a positive challenge the girls would have likely risen to it. We could have adjusted the group order or at the very least, switched Sonia and myself, so that Sonia was more of a visible lead in the effort.

Three weeks later we were in the same spot. One of the boys looked up at the hill with obvious pride, “There’s that hill.” Without missing a beat Sonia said, “Does anyone want to go back up there?”  All the girls and a few of the boys joined her. I stayed behind this time with the others. Having Sonia initiate the challenge clearly played a supportive role, but it was the look on the boy’s face when he acknowledged the hill that said it all; it said, “I know that hill. And here, in its shadow I feel more connected with this place and therefore more at ease.” That is Nature Connection. Having taken the time to acknowledge the kids, reflect on their experience and plan for the future, Sonia was able to stretch that connection to more of the group. That is mentoring.