As a college student, my friends and I would occasionally escape to Lizard’s Mouth, away from Isla Vista’s over stimulation or the library’s constant call. We’d drive the distance, walk a bit until we found a nice rock, and then sit. Although the wind and view left us refreshed and humbled, I always left with the sense that I hadn’t fully tapped into the magic of Lizard’s Mouth. Those days passed, and Lizard’s Mouth didn’t cross my mind until one summer when I returned to Lizard’s Mouth with Wilderness Youth Project.

That day a Treefrogs group of 6-8 year olds bravely ventured up to Lizard’s Mouth despite the hot and sunny weather. We established home base in the shaded refuge of a doughnut shaped rock, and peeled off in separate directions, small groups of us following our natural interests. As we ran through the narrow corridors of giant sized boulders and hopped across their open tops, I discovered the untapped magic I had 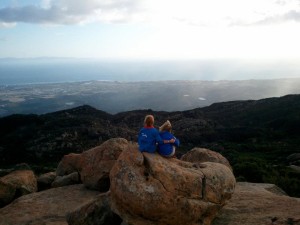 sensed, but not known. I was stoked, and wanted to immerse myself even deeper in the experience. I like to cover distance; so, I turned to 8/almost 9 year-old Clifford, and pointed to a rock far away. I asked, “How do you figure we can get there?” He stood tall, and his eyes lit up. I could tell we were going there. We stood together and studied the terrain in front of us. We strategized which rocks to go over and which ones to go around. His sister Marina tuned in, and piped up when she noticed alternate easier routes. Then, little Ceci meandered over, and asked to join. Clifford responded, “Why, of course she can be part of our mission!” Now, we had a crew.

Before setting off, we checked our water bottles, filled them up, gathered snacks, lathered on sunscreen, and adjusted our hats. Then, we took off with a sense of purpose. We brushed against manzanita trees, coyote bush, and chamise. We slid down rocks’ rough surfaces and kissed their lichen. As we rested in the rare shade, we wiggled our toes in puddles of soft loose dirt. Some hillsides were trickier to summit than others, and some crevices were more challenging to descend than others. We encountered radical hang-out spots with winding footpaths in between “ginormous” boulders. Everyone at some point found a place they loved, yet the mission continued and we kept moving. Although Clifford’s long legs moved faster than the rest of ours and his arms reached higher holds than any of ours, we’d switch off leading the pack and wait for those in the back. In addition, the group expressed their needs along the way. Sometimes a whisper of hunger told Marina she needed a snack, or it told Ceci that it was time to rest her legs. We learned to listen to those whispers. 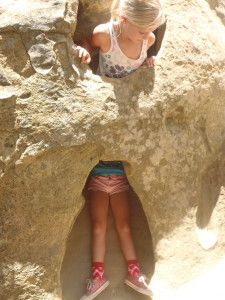 For the entire journey, our goal and our starting point were in sight. As we approached our predetermined destination, we hooted and ran faster! Joy surged through us when we arrived at the spot. We high-fived and smiled. We marveled at the terrain we had crossed, and pointed at where we had begun. Even though we stood at the end of our goal, we still felt in the middle of something great. After all, the boulder spotted terrain stretched for miles in every direction. I had gazed at the same boulder spotted terrain many times before, yet I had never been so attuned to its magic.

At the beginning of each Wilderness Youth Project program, we’re on our way to tap into the magic of some place.  Part of tapping into a place’s magic involves awareness of the diverse life around us. At Lizard’s Mouth we pointed to blue-bellied lizards perched atop rocks, darkling beetles crawling in the sand, and turkey vultures soaring in the wind. Another part of tapping into a place’s magic is sensory experience. At Lizard’s Mouth the feel of a rock’s cold rough surface, the wonderful sight of moving clouds, and the sound of silent stillness created the story I remember so well. The places we go with Wilderness Youth Project supply an abundance of sensory experiences, and together we identify plants and animals around us. Thus, children repeatedly refer back to these plants or animals. The children’s knowledge and awareness of plants and animals grows with each experience, as does mine. This knowledge and awareness, as well as the experiences that build them are invaluable. We bring them wherever we go, and they allow us to tap into nature’s magic. Before we realize it, we find ourselves tapping into the magic of ordinary strips of vegetation along the bike path- a situation which may also render a great story. Anybody got one?